Skip Breakfast and Pay For it Later (with Calories!) 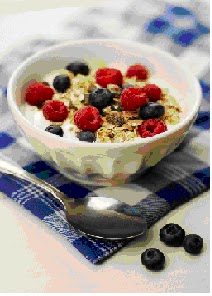 Do you think that by skipping breakfast you can “save” your calories for that fancy dinner or holiday party you’re going to tonight? Think again! While some people do succeed at not overeating later, most people find that they are extremely hungry once they get to a party, and will have a tendency toward the least healthy dishes served.

Everyone has heard that breakfast is the “most important meal of the day” and there are countless studies showing that people who eat breakfast have lower body weights and kids who eat breakfast perform better in school. Through my own experience working with clients, I have found that those who don’t eat a healthy breakfast tend to have problems with binge eating or nighttime snacking.

A recent study presented at the Neuroscience 2012 Conference did indeed find that when people skip breakfast, they are more likely to seek out calorie-dense foods and overeat later in the day compared to when they eat breakfast.The researchers did brain scans on 21 normal weight people and found that the part of the brain involved in food appeal became activated when subjects were shown high calorie foods, but not low calorie foods, on days they weren’t fed breakfast. Subjects also consumed larger lunches on days they were not fed breakfast. The take-home message from this study was that eating breakfast takes the edge of your appetite, so that you are less likely to be tempted by high calorie foods, and will end up eating fewer calories later in the day.

I know during the holiday party season people are tempted to fast throughout the day and “save” their calories for later. This study suggests, and most health experts would advise against that mentality: you will probably end up making healthier choices at the parties if you do eat a nice breakfast and don’t starve yourself early-on. If you fast throughout the day, chances are that eggnog, artichoke dip, and cookies are going to look even more delicious, and you will probably end up consuming more calories than if you had a simple, healthy, breakfast. It only takes a mere 15 minutes out of your 24 hour day to make and eat a healthy breakfast, and it can potentially save you the hassle (and health consequences of gaining weight and needing to lose it ;-)

Tip of the Week: Make Sure You're Getting 6-8 hours of ZZZZZZZZZ's Each Night!

More and more research shows that your body needs a precise timeframe of sleep (6-8 hours) each night in order to work properly and have the most efficient metabolism. Over 35% of Americans are classified as obese (BMI >30 kg/m2), with an estimated 28% of those getting <6 hours of sleep per night. There are several studies linking sleep deprivation and childhood/adolescent obesity, which has been attributed to increased daily screen time and calorie consumption. In one recent study [done by well-qualified PSU professors ;-)], researchers found that people who were sleep deprived have increases in the hormone ghrelin (hunger-stimulator), decreases in leptin (regulates energy intake, energy expenditure, and signals satiety/fullness to the brain), and reduced insulin sensitivity.
Another study I blogged about on April 12th linked lack of sleep and altered sleep patterns in night-shift workers to an increased risk for diabetes and obesity due to disruption of the natural circadian rhythm of the body. We all knew sleep was important for feeling alert, concentrating, and for keeping ourselves healthy, but now we have even more motivation to make sleep a priority- to keep our bodies thin and svelt!

My recommendation:  Do whatever you can to make sure you get between 6-8 hours of sleep each night.  Make sure you block out this time to at least lie in your bed if you have real trouble sleeping- don’t stay up watching TV or going on the computer! Practicing meditation and exercising daily should help you sleep, but talk to your doc if you still have issues falling or staying asleep. Don’t go without this issue being addressed! Lack of sleep can wreak havoc on your body and potentially make you gain weight- which will cause a slew of other health issues for you!

Recently there has been a big push to purchase “natural” and “organic” food products. I think the consumer demand for these products has been great, and the food manufacturers are responding. We are seeing a lot less additives added to these types of foods, but there is still a lot of work to be done. Both the terms natural and organic are not regulated by the FDA, but the USDA does certify foods as “organic”, but that term has different regulations depending if the food is a crop, livestock, or a mixed-ingredient food. Natural has no standard definition.
I caution you to assume that a natural cookie or donut is an okay food choice, or that organic potato chips are a healthy treat. As with every food, look to the ingredients to learn what is actually in the product, and check out the nutrition facts before biting in. Just because the chocolate chip cookie is organic and from Whole Foods doesn’t mean that it is good for you. Natural and organic junk food usually contains just as many calories and grams of saturated fat… and they aren’t whole grain unless that is listed as the main ingredient. So, they are still junk food even if they are an organic junk food.

My recommendation:  Personally, I wouldn’t even bother buying super expensive organic or natural cookies and treats. By purchasing the cheaper versions, you know that they are loaded with all sorts of junk, so you probably won’t be inclined to eat as much as if you had purchased the natural version. If you buy the organic and/or natural versions, you might be more inclined to overeat. However, if your kids eat lots of snack foods, then it might be worth the investment, but always look to the ingredients and nutrition facts… and watch the amounts the kiddies are eating!!!
Posted by Kelly Bakes, MS, RD, LDN at 4:54 PM 1 comment: