Didn't Think That Was a "Magic" Brownie? Think Again!

Those brownies need not be “special” and those cakes need not be “space” cakes for you to get pleasurable feelings from them….new research shows that foods can act just like drugs in the body. 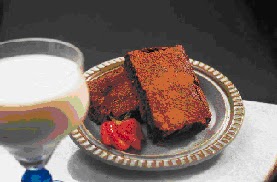 Many people find that they crave certain foods, and when given access to that food, they just can’t seem to manage eating one measly portion. For years, I’ve been telling my clients to try to think of “trigger foods” as drugs, to really think about the consequences before you bite into that cookie or take a French fry. My goal has always been to make people more mindful of what they’re eating, but I didn’t realize how accurate I was with the drug analogy. You’ll notice that foods people crave don’t tend to be naturally occurring in nature. I would guess you don’t find someone craving a cucumber, but rather, a pickle. No one craves a cup of corn or oats, but rather, tortilla chips and oatmeal cookies. The theme amongst foods people crave is the fact that they tend to be highly processed and high in fat, sugar, and/or salt. Research now shows that these heavily processed foods can act in the body just like drugs, and make it difficult to resist a food at all, or stop at just one serving size.

Oregon Research Institute published a study earlier this year that had young children look at pictures of chocolate milkshakes, and then consume them later. Children who had consumed the most milkshakes over the course of the study showed a lower response in the reward centers of the brain when given the milkshakes at the research site. One researcher said: "Over consumption of these foods down regulates reward processes [. . .] that may, in turn, make you eat more. You could be continually tying to match the earlier experience.” The result of this down-regulation can cause you to consume larger and larger portions whenever exposed to the treat, which could cause you to gain weight if exposed frequently enough. As the body becomes more accustomed to the “drug”, you need more to get the same pleasurable feeling you got the first time you tried it.

Another study showing the similarities in processed foods and drugs showed that rats go through withdrawal symptoms when sugar was taken away, and consumed 23% more once allowed to consume it again. Last year, studies done in and showed that rats who consumed a fatty liquid diet started producing endocannabinoids, which are compounds similar to those produced by marijuana. Another study from the recently studied neuronal cues when rats were exposed to chocolate M & M’s. The researchers identified a link between a part of the brain called the stratium and an endorphin called enkephalin which is known as a pain-relieving peptide. They found that when they synthetically injected the rats with enkephalin, the rats ate faster and consumed double the amount they did without the enkephalin. When the rats ate the M & M’s on their own, the levels of natural enkephalin increased.

MY RECOMMENDATIONS: When changing people’s diets, I always encourage them to try to stick to the most natural of foods: real fruit instead of fruit juice, old-fashioned oats instead of gluten-free dry cereal, a baked potato instead of French Fries. One reason I have for this is not just the research on the drug effects of processed foods, but processed foods also seem to be metabolized differently and can cause you to gain weight easier. Whole foods also contain much higher levels of antioxidants, phytonutrients, and fiber than their processed counterparts. I recommend you try to cut out the heavily processed foods, and try to find alternatives to your “guilty pleasures.” Try to wean yourself off of ice cream by making smoothies with yogurt, make your own egg sandwich by using whole grain English muffins with a poached egg, and drink coffee with milk and sugar (or honey!) instead of the flavored creamers. By eating more naturally, you will find that you don’t crave the things you once did, sugared foods are too sweet, salty foods are way too salty, and having one bite of a cookie is enough to get the gist- you don’t need to eat the whole box to understand the flavor and texture.

Tip of the Week: Get “WHOLE-ly” with Grains!

This week, only allow yourself to eat grains that are 100% WHOLE GRAIN. Many are convinced the gluten-free diet sheds weight, when the reality is that most people are probably just cutting out things they used to overeat (pasta, crackers, cookies, etc). Whole grains are vital for weight loss and maintenance, as well as overall health, so they are important to include in your diet. By challenging yourself to only eat whole grain products; you will have to say no to those Stacy’s Pita chips, a hoagie on a plain roll, regular pizza, or pasta at a restaurant. You will learn to seek out whole grains, and when eating out, you will automatically be making healthier choices by skipping the pasta-based dishes altogether and hopefully ordering the fish that comes with a side of vegetables and red quinoa! Whole grains can include: whole wheat flour, brown rice, quinoa, amaranth, bulgur, barley, buckwheat, popcorn, wild rice, whole grain corn, oats, and other more exotic grains.
Note: This is just a one week exercise. You should never go on a diet that completely prevents you from eating things you enjoy (unless specified by a medical doctor). However, this activity will train you to think about the grains you’re about to eat and whether they are helpful (whole grain) or harmful (refined grains). The goal is to learn to eat primarily whole grain products for the rest of your life!

Nutrition counseling reimbursement may be available for the following insurance plans:

The following blog was written by a guest blogger, Paige Taylor:


How Nutrition Can Help With Drug and Alcohol Addiction

Drug and alcohol abuse have two major negative effects on health: Not only do the alcohol and drugs affect the body itself, but they can cause adverse lifestyle changes like poor dietary habits.
A woman who drinks while pregnant may give birth to a child with physical or mental defects. As the American Pregnancy Association explains, the alcohol a pregnant woman consumes permeates the placenta to reach the baby and can cause major developmental problems that might be irreversible. Since alcoholism is “one of the major causes of nutritional deficiency in the United States,” according to Medline Plus, normal growth and development of the baby is harmed even more.

High levels of alcohol consumption changes gut permeability.  The gut absorbs endotoxins released by bacteria, and these endotoxins impair the liver.  When the liver can no longer detoxify, Kupffer cells release free radicals, increasing oxidative damage.  This could result in a hypermetabolic state, which causes a negative nitrogen balance in the body and increased peripheral insulin resistance.  People suffering from hypermetabolism often experience symptoms such as weight loss, anemia, shortness of breath, and rapid heart rate.

Substance abuse has other negative effects on the body, especially, when trying to recover. Abusing drugs and alcohol slows the body’s metabolism, impedes the proper functioning of the organs, and adversely affects mental health. Eating a diet full of the proper nutrients during recovery can help the body to heal.

How Certain Drugs Affect the Body

Different drugs have different bearing on nutrition, according to Medline Plus.

• Opiates like heroin, morphine, and codeine can harm the gastrointestinal system, causing symptoms like nausea, diarrhea, and vomiting during withdrawal from the drug. Each one of these symptoms can result in the body losing valuable nutrients. The proper levels of electrolytes like sodium, potassium and chloride can also be thrown off balance. Eating foods high in fiber and complex carbohydrates during recovery from an addiction to opiates is suggested.

• Regular alcohol use, especially amongst alcoholics, can cause severe nutritional deficiencies. Those nutrients that are most commonly depleted due to alcoholism are vitamin B6, folic acid, and thiamine. The result of these deficiencies is often depression, fatigue, and problems with the nervous system.

Alcohol abuse is also harmful to the liver and the pancreas, which are both important for nutrition and metabolism. If these two organs are damaged, there can be an imbalance of electrolytes, protein, calories, and fluids in the body.

Other side effects of alcoholism are diabetes, malnutrition, cirrhosis of the liver, high blood pressure, and seizures.

• Using cocaine, crack, and methamphetamine reduces the appetite, which can lead to poor nutrition and weight loss. These stimulants also cause electrolyte imbalances and dehydration. Problems with memory can be a side effect of stimulant use.

• Marijuana stimulates the appetite and long-term use can lead to weight gain, according to a study published by John Hopkins University.

Nutrition and the Mental Aspects of Substance Abuse Recovery

A nutritionally balanced diet is known to improve not just overall health but mood as well. That is why it is so important for those in recovery to maintain a healthy diet. Generally, when people feel healthy the chances of a relapse are less. The University of Maryland Medical Center suggests guidelines that those in recovery should follow:

• Have a regular meal schedule
• Eat foods low in fat
• Eat plenty of foods with protein, fiber, and complex carbohydrates
• Take vitamin and mineral supplements
• Make sure all snacks are nutritious
• Stop smoking
• Cut down on caffeine
• Incorporate physical activity

For any questions or comments regarding this article, please contact Paige Taylor at: pgtaylor8@gmail.com
Posted by Kelly Bakes, MS, RD, LDN at 2:03 PM No comments: